AND IT IS QUITE AMUSING 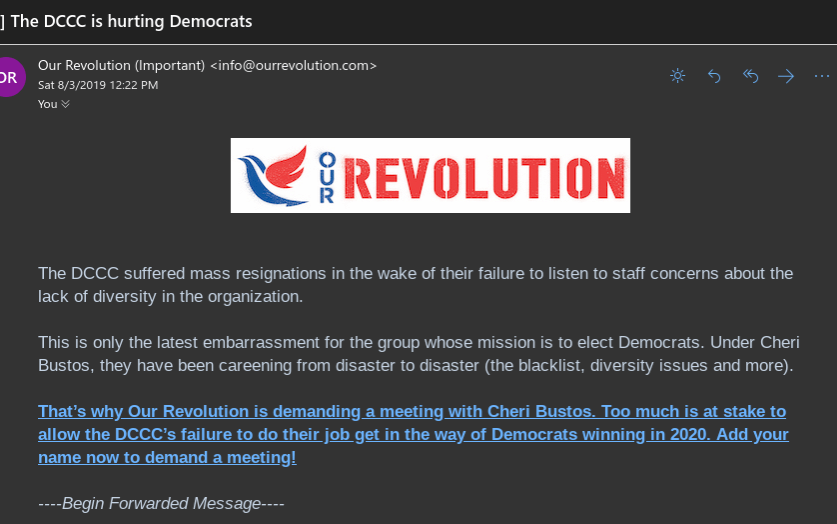 The infighting between so-called moderates and progressives among the Democrats is spiraling out of control.

The DCCC is hurting Democrats

The DCCC suffered mass resignations in the wake of their failure to listen to staff concerns about the lack of diversity in the organization.

This is only the latest embarrassment for the group whose mission is to elect Democrats. Under Cheri Bustos, they have been careening from disaster to disaster (the blacklist, diversity issues and more).

That’s why Our Revolution is demanding a meeting with Cheri Bustos. Too much is at stake to allow the DCCC’s failure to do their job get in the way of Democrats winning in 2020. Add your name now to demand a meeting!

After dividing our party by creating a “blacklist” that punishes people for daring to work with progressive candidates, the Democratic Congressional Campaign Committee (DCCC) is back to hurting Democrats.

Earlier this week there were mass resignations at the DCCC after promises to increase diversity at the staff level went largely unfulfilled.

That’s why Our Revolution is demanding a meeting with DCCC chair Cheri Bustos — our party is better than her continued disregard for diversity.

Add your name here to demand that DCCC senior leadership sit down with Our Revolution and other progressive groups to discuss ways to increase diversity at the staff level and the consultant level by ending the DCCC Blacklist.

Our Revolution is focused on electing progressive candidates, fighting on progressive issues and holding the Democratic Party accountable to our ideals.

The DCCC needs to do better.

Their job is to elect Democrats, but somehow they think it’s a good idea to antagonize people of color and progressive candidates who could very well win their primaries despite the DCCC’s systemic bias.

Tell the DCCC to focus on their job of fighting back against Republicans and meet with Our Revolution to discuss how they can be better.

Richard Rodriguez
Our Revolution Board Member

Not authorized by any candidate or candidate committee. Our Revolution is a 501(c)(4) organization. Donations to Our Revolution are not deductible as charitable contributions for Federal income tax purposes. All donations are made to support Our Revolution’s general mission and are not designated for any specific activity.