EUROPE IS MUCH
MORE CONSERVATIVE
THAN PEOPLE THINK
Abortion laws in European countries are often
more restrictive than those in the United States.

Andorra, Malta and San Marino do not allow abortion at all. Monaco and Liechtenstein allow it only when a woman’s health or life is at risk.

In Germany, abortion can only be done within 12 weeks of conception.

Of a Homeless Woman

They claimed to care. They didn’t. They had an agenda — an unholy, abominable one. To legalize a lucrative, but lurid business — the abortionist trade.

“At that time, I was a street person. I lived, worked, and panhandled out on the streets. My totally powerless circumstance made it easy for them to use me. My presence was a necessary evil. My real interests were not their concern.” — Jane Roe of Roe vs. Wade, the Supreme Court case in which a majority of the justices declared a right to kill the unborn.

Her real name? Norma McCorvey. And she spent years trying to undo what had been declared in her interest. She died on Saturday.

This quote makes me refocus on Margaret Sanger, the founding of Planned Parenthood, and the eugenics movement. It’s so creepy and stealthy, the effort to eliminate the poor by killing them off before they’re even born.

Their using her like this reminds of rape and rapists. It is no different.

If it takes electing The Donald to get feminist icon Lena Dunham to leave the country, then I will do my part. Vote TRUMP!

An actress turned feminist sage who self-deports? Don’t get much better than that. Now, if we could only get her to shut up. Just go away, please.

“ . . . I’m pretty worked up about the possibility of a woman president: it’s something I thought was impossible, maybe even illegal, when I was a little girl.”

“But one thing I’m not, as I’m routinely told, is ill-informed or ignorant—supporting Hillary only because of our shared anatomy. I have no plans to blindly follow my uterus to the nearest polling station.”

Anyone believe her? If Hillary was a man,¹ Lena would vote for him!? I ain’t buyin’ it.

“Feminists who support Hillary for provincial gender reasons are guilty of a reactionary, reflex sexism, betraying that larger vision required for the ballot so hard-won by the suffrage movement.”
— Camille Paglia

One of the sacraments of the Left is abortion. Of course, numerous conservatives have pointed this out. But so have leftists. Just read what Camille Paglia has to say about this. Whenever a lib argues otherwise, don’t fall for it. They are lying.

Dunham and company don’t seem to understand that the more incredulous they are about Trump’s success, the more it fuels his supporters. I’m not even a Trumpster, and yet one reason I’d vote for him would be to piss off the likes of Dunham. Trump is seen as a middle finger to the Establishment. Sure, an imperfect one, but Trump conveys the message.

By the way, yes, you are ill-informed and ignorant. 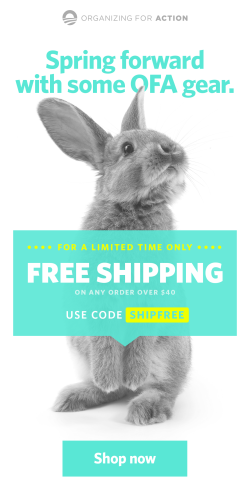 How dare you, Organizing for America! How dare you threaten a cute, little bunny rabbit!

And in the attempt to sell crap to Americans who usually demand freebies!

Shouldn’t the swag be free, too?

At least there’s free shipping. Is it really free though? Gotta spend more than forty bucks.

What a revealing lesson in liberalism.

The healthcare, the abortions, the condoms et al aren’t really free. There is a cost associated with all, often more than just monetary.

Ceding power to the government means less power for the people. And, of course, someone, no matter what they say, has to pay the bill.

What this very commercial propaganda campaign really looks to accomplish, based on the merchandise available, is to pressure the spineless Senate Republicans into confirming Judge Garland to succeed Justice Scalia.

P.S. No one threatened to harm the bunny, by the way. I just made that part up.

It’s great to see this on the front page of The New York Times. I am glad to see women, like my sister and mother, who take a stand against the onslaught of propaganda surrounding “women’s rights” and abortion.

It was a busy past few days in Washington DC. Inauguration festivities coincided with the MLK holiday and the fortieth anniversary of Roe v. Wade.

Two tweets about Roe and abortion caught my attention this morning.

I remember pre-Roe, too. Mostly I remember a baby girl who would be 32 this year. I will forever wish I’d chosen life. #tweet4choice

Everyone makes mistakes. It is nice to hear from women who have knowledge and wisdom about it.

Wojciehowicz @Wojciehowicz
Seriously, how did abortion, which lets men sire children then walk away and leave women holding the bag, get turned into empowerment?